supply distribution is the only "fundamental" metric in crypto

Note to “free” subscribers: We’ll be building, and researching, and evangelizing throughout this bear market, regardless of how long it lasts.

But we need your help to do it.

This week will be the last week you can subscribe to Unqualified Opinions at the rate of $15/month or $100/year. After that, we’ll be doubling fiat prices, and paywalling 80% of our research content to make it more sustainable and keep it uncorrupted by ads. Benefits to subscribing:

Give a gift subscription

Crypto Inflation - Maybe the only fundamental metric that matters in 2019.

One of my favorite parts of Bitcoin (now crypto) has always been its experimentation with new monetary models. We’ve tried an annual 2% inflation target in the US for the last 100 years, with intermittent success, while many other countries have failed catastrophically at managing their currencies.

Yet with a rapidly rising debt load, here and abroad, maybe it’s time we tried something else. You know, just in case the existing system blows up.

[TBI Note: That idea is what got me into this industry for sure.]

Bitcoin blew the space of monetary experimentation wide open, much to the horror of Keynesian economists the world over. But let’s get specific, what currency issuance models have we seen arise so far in crypto? There are many nuances, but a few broad strokes. Here are a few:

This is bitcoin’s key innovation; the thing that has never existed in human history before: a credibly transparent money supply and monetary policy. We know with certainty what bitcoin’s supply will be on any specific date in the future. Or at least, what the supply will be at any given block height.

(Don’t @ me about forking to low inflation - no one will call that fork “bitcoin”.)

Whatever you may think of the wisdom of fixed supply, no other monetary system has ever had this credible transparency property. In crypto, we’ve seen many coins imitate bitcoin’s algorithmic model. You may have noticed that we just added “Current Inflation Rate” to OnChainFx for many coins: 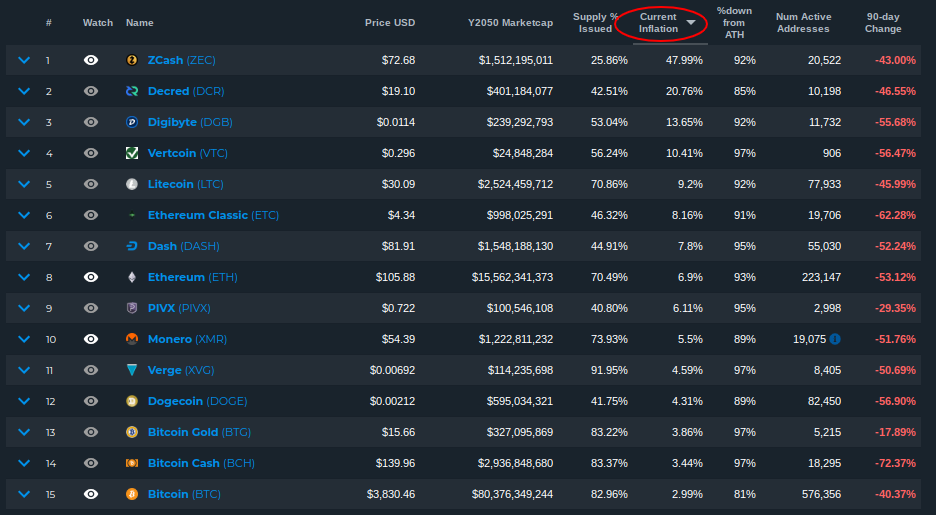 These inflation rates are the annualized rate of inflation calculated by looking at the last 24hrs worth of new on-blockchain supply issuance. As you can see, there’s a huge range. It would be amazing to see a list of central banks’ post similar details!

At first glance, the inflation of a fledgling asset like ZCash may look pretty extreme (48%!), but that’s a blip on the radar compared to other hidden inflation in pre-minted coins/tokens.

There are many ICO projects running pseudo-monetary networks where new currency is released over time at a token creator’s discretion.

Projects may have *technically* issued 100% of their token’s total eventual supply up front, but merely released a fraction of that into the market. Large chunks - often well over half - may be tied up under vesting schedules (that may or may not be public) and will therefore hit the market in significant cliffs over time. We have yet to see how this inflation-is-zero-until-suddenly-it’s-not model impacts operational networks.

If this information is sufficiently transparent and widely known, we should see the market price it in. But bottom line: there is much less certainty and transparency than in the algorithmic model. Teams with large managed supplies almost always do well when they burn or provably lock-up large portions of their supply for long-term vesting schedules.

See Numerai last week, which cut 10mm NMR from its reserves, and then cheekily added this week, that the goal was to be “decentralized as f*ck.”

Ryan Selkis @twobitidiot
It shouldn't have worked, but it did. $NMR is now up 40% on the news, erasing the last month's of losses within three hours.

See also Ripple last year, which skyrocketed after the company announced its intention to escrow 55% of the total money supply:

Finally, there’s the “we’ll figure it out as we go!” camp.

Ethereum is of course the key example of an asset whose monetary model is in flux by design. From relatively early on, the Ethereum community decided to let the network evolve, and to do ongoing research on economic design in order to, in theory, arrive at a more optimal model long term. Perhaps that will be the case in the end, perhaps not, but anecdotally there seems to be more discussion of the wisdom or carelessness of not having a monetary model well defined up front.

Any cryptoassets which prioritize on-chain governance effectively have this “we’ll figure it out” property as well. When protocol-level upgrades are an explicit design feature, the ‘upgradeability’ of new monetary models falls into that category, too.

We’ll see how the market ultimately rewards flexibility or certainty in crypto monetary models. And how liquidity (or lack thereof) impacts the various tokens with algorithmic, discretionary, and community governed supply schedules.

The punch line to me is that humanity is no longer subject almost exclusively to the century-old status quo.

Without a clear, articulated governance structure, crypto protocols suffer from delayed decision-making and implementation as well as contentiousness around the validity of those decisions. Today, a number of forces are increasing the broader crypto communities focus on governance, with implications not only for protocols but the developers, investors and communities that surround them. There are three reasons for the growing focus:

While the problems with today’s governance models are numerous, a few stand out: efficacy and finality in “1.0” off-chain governance models, and plutocracy and populism in emerging “2.0” on-chain models. (Messari | Source)

While hash rate may go up in absolute terms due to improved ASIC efficiency, hash rate is just a proxy for network security. The key metric to note is security spend, quantifying how much money is spent on mining opex and capex to secure the network.

Websites like Crypto51 track the theoretical cost of attack, while they often don’t reflect real-world constraints of attack, they serve as a useful barometer; particularly with smaller networks that use the same hashing algorithm as larger networks. (Messari| Source)

The Powers That Be (Legal/Reg/Policy)

🎧 ICYMI on the Messari podcast, This week, Katherine sat down with Messari’s own Dan McArdle to talk about the recent downturn in crypto markets. Dan shared his thoughts on what is now the fourth "crypto recession" for him, and where he thinks things might head in the short to medium term.

Listen and subscribe to all of our podcasts— on Apple Podcasts here, Spotify here, and Google play here.

We want your feedback!

We know Messari can feel like a couple different products right now, and we're working to unify our features into one overarching whole. To that end, We’ve made a Trello board to take in any and all of the feedback you have for us! Have at it 🛠

We sent an email to with a link to finish logging in.